Do you want to use the Real-Time Console or ControlUp Monitor to run scripts on your remote machines? No problem! You can do so by using Script-based Actions (SBAs). You can run your own scripts or you can download them directly in the console.

How to Find SBAs

You can find the main Scripts Management window on the Home ribbon of the ControlUp Console, and it is divided into three sections: My Draft Scripts, Organizational Scripts, and Community Scripts. 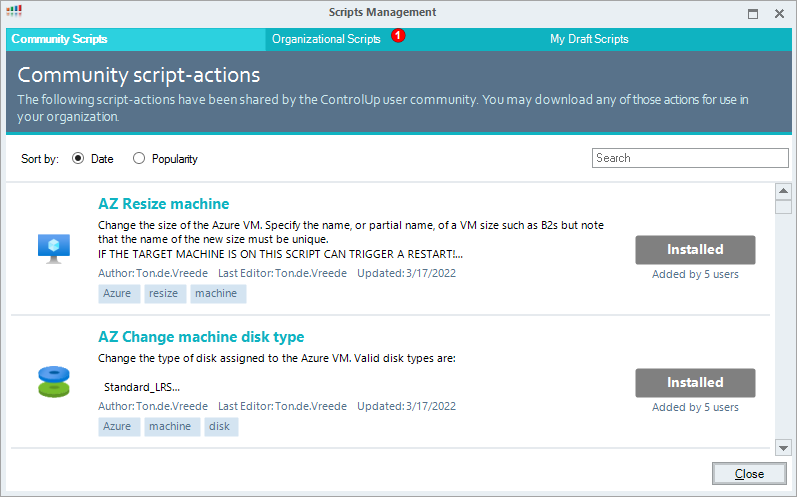 When you first create an SBA (see Creating a Script-based Action), it is stored in the My Draft Scripts section in your private configuration where it can be tested and debugged until it is ready to be shared with others. The only restrictions on draft SBAs are that they can not be used against more than one target at a time, and they can not be shared with other ControlUp admins. When an SBA is finalized, it can also be shared with the user community at the same time (see Sharing SBAs with the Organization and the ControlUp Community below for more details). 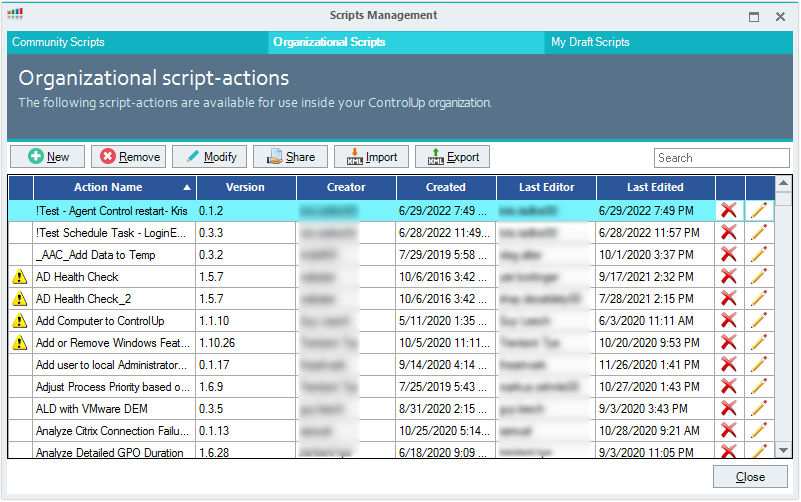 SBAs shared by ControlUp users around the world are listed in the Community Scripts section. Everyone can download and use them.

To create a new SBA, perform the following steps:

An SBA can only be assigned to one record type, even if it can be invoked from multiple views.

This window provides the following options:

If you want to ensure that the field is not left blank, a simple “.+” (no quotes) can be used in the input validation box.

The arguments are mapped according to the script type and are referenced appropriately:

Once the SBA is created, it appears under My Draft Scripts until finalized. This allows you to test the script at one target at a time.

Adding arguments to your script

When you add a parameter to the script, the value for this parameter can either be a value that is known in ControlUp or a user-defined value. We explain the difference by using the following example:

The first parameter in our example is $sessionID which stores the value of the user session ID. This ID is already known to ControlUp, so we need to select the Use this record property checkbox and provide the following values: 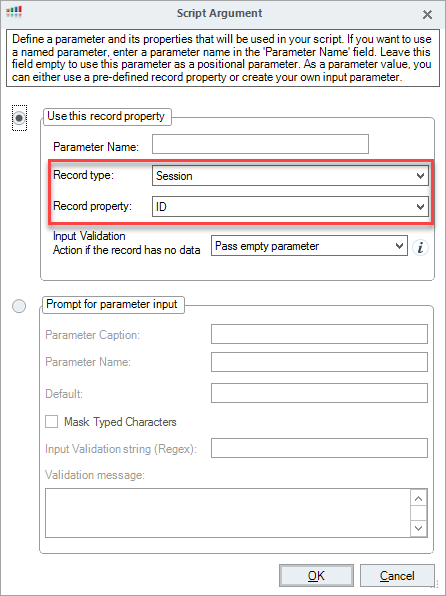 When executing the script, the ID of the selected user session (in our case 1) is taken as the parameter value.

In the same window, you can define your own parameter name and add an input validation to your record property.

The second parameter we define is $message. This is the message we want to send to our user. If you define your own parameter, follow best practice and add parameter captions, a default value and some validation. 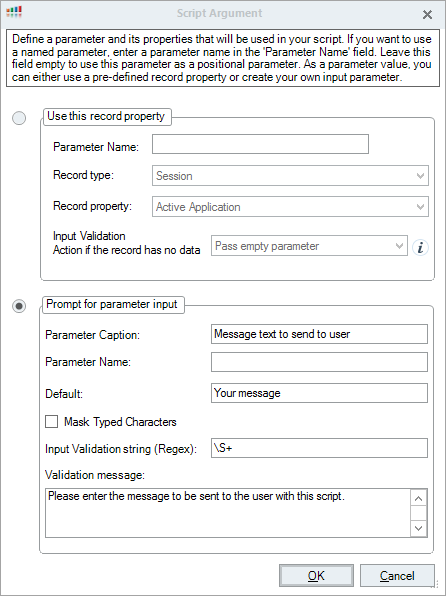 When executing the SBA on a user session, the user that runs the SBA is prompted to provide a value for the message. 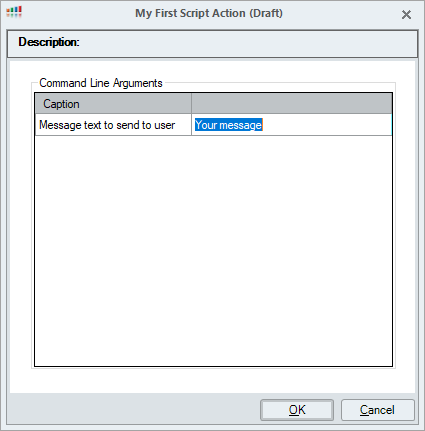 Once you click OK, the SBA is executed and the popup with the provided message is shown in the user session.

Input validation of a record property

When you select a record type, you can define how the value is validated.

You can find more information on each option in the Options to ignroe empty metric data section.

To validate or prevent wrong user input, you can use regular expressions. For example, if you want only digits to be allowed as the value, type \d 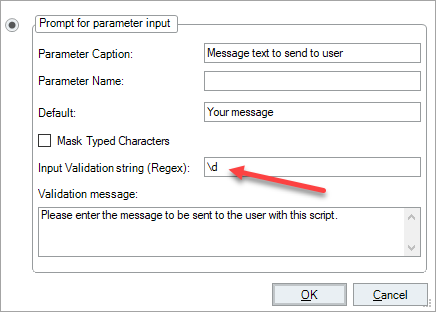 If the user uses any string message, the script is not executed and the following error is thrown:

Versioning your scripts is important to version control. The structure for version numbers is

You can modify an SBA either from the Organizational Scripts or My Draft Scripts section. There are three ways to do it:

When you modify an organizational script, a copy of the script appears in My Draft Scripts with its draft version number incremented by 1. For example, we have script in the Organizational Scripts tab that has version 0.1.47.

After modifying the script, a copy of the script is created under My Draft Scripts with version 0.1.48.

You will then see two scripts with the same name in the context menu, one from the Organizational Actions and the other from the My Drafts Action, with the SBA name appended with the label (Draft).

If you edit the same organizational SBA while there is already a version in My Draft Scripts, ControlUp will warn you that the existing draft version will be overwritten by the new edits if you continue.

When the new draft SBA is finalized, it will replace the previous organizational script (if it exists) and increment the organizational version number (in our example above, the script becomes version 0.1.49)

By clicking Import, you can import a JSON file that was exported from the same or another system.

You can execute scripts by right-clicking ControlUp objects, such as a virtual machine, a user session, or a process.
Hover over Script Actions and select the script from the context menu. Alternatively, you can use the Actions button in the Home ribbon. Draft and finalized scripts are visible in the context menu. 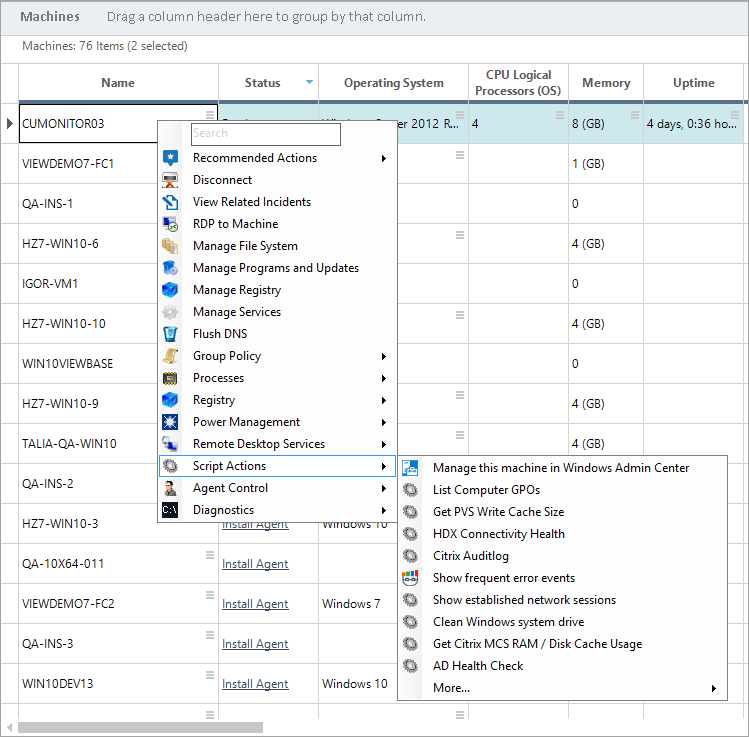 The listed SBAs will be appropriate to the current view. Click on the script you want to run while the targets on which you want it to run are selected in the grid.

In the top half of the window, the ‘Output’ section displays normal output (StdOut) and the ‘Error’ section displays StdErr. The bottom section gives various details about the script execution on each target attempted. Some of the fields, like ‘Status’ and ‘Exit Code’ can depend on how the script is written. In the top half of the window, ‘Output’ and ‘Error’ refer to command line output and errors.

Here we see a VBScript that failed to run because the target computer (Execution Context) is not a part of a domain that has a trust relationship with the domain that the running user (Security Context) belongs to. There is a command-line error shown, but since the script never ran, nothing was in StdErr.
Consider this XenDesktop PowerShell script snippet:

Without the ‘Exit 1’ command to explicitly send the exit code, the script status would show ‘Exit Successfully’, even though there was a failed condition. This is due to how PowerShell evaluates error conditions and return codes. Since we want regular messages to StdOut, the Write-Host is used to write to the ‘Output’ window. Write-Error would put the message into StdErr.

Getting the script to report on the result screen as desired may take some extra scripting. For example, continuing to use the PowerShell snippet above, $TargetMachine could have a value, but the Set-BrokerPrivateDesktop cmdlet could still fail for some reason. The cmdlet in this case may require a Try/Catch construct to get the desired behavior from the results window.

Batch commands and VBScript will behave similarly. If you do not see the results in the windows that you expect, try other similar batch/VBS/PowerShell commands and review how the language processes output and return codes.

The result groups are simply a way of grouping records with identical outputs to help simplify reading and interpreting results. Any error messages must also be identical for the targets to be in the same result group.

Lastly, the Stop/Rerun buttons at the top give the admin a way to force an SBA to quit before it is finished, or immediately re-run the action on the desired targets with the same parameters without having to go through the setup steps again. This could be useful if, for example, there was an error condition that prevented a script from completing successfully. Upon seeing the script error, the admin makes the necessary fix and can now re-run the script just on the failed computer/account with a single click.

To remove an SBA from the Organizational Scripts or My Draft Scripts section, perform the following steps:

When you delete your finalized (organizational) SBA, the community version will not be deleted. If you want a public script to be removed from the community SBA collection, contact our support team

Sharing SBAs With the Organization and the ControlUp Community

One of the powerful features of ControlUp is the ability to share your SBAs with other admins in your organization as well as with ControlUp users around the world. At the same time, you can also benefit from the SBAs created and shared by other ControlUp users around the world. Once your script is ready, you can share it from either the My Draft Scripts or the Organizational Scripts section of the Main Scripts Management dialog box, as explained further below.

Sharing SBAs from My Draft Scripts

To share an SBA from the My Draft Scripts section, perform the following steps:

Fill in the next fields only if you want to share your script:

You can find SBAs shared by ControlUp or the ControlUp community under the Community Scripts section of the Scripts Management window.

To import the community SBA for use in your organization, perform the following steps: 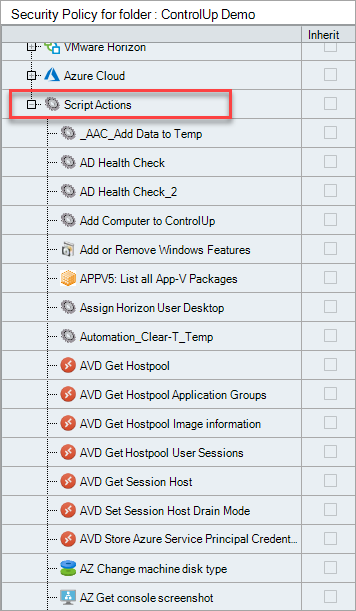 With ControlUp version 8.6.5, we added two new options to validate input for empty record properties. Let's say you write a script and some of your arguments use empty record properties, then you don't want your script to run into an error. The screenshot below shows a Company value for the cuAgent.exe, but an empty value for the cuAgentHelper.exe process. 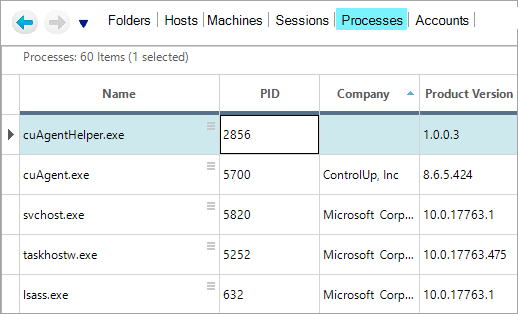