Horizon on Azure Sync to ControlUp

Using our synchronization scripts, you can automatically populate the ControlUp organizational tree with your Horizon VDI running on the Azure cloud. Our sync script is run as a Windows scheduled task so that when you add or remove machines, those changes are automatically reflected in the organizational tree in ControlUp. You don't have to make any of those changes manually. When the script is run, your ControlUp organization reflects your current Horizon VDI for monitoring and remediation.

You download the sync scripts from our GitHub repository of environment scripts which also includes synchronization scripts for other environments, including Horizon installed on-premises.

2. Create the credentials files by running the Store_credentials.ps1 script

The Horizon on Azure Cloud requires dual authentication. To run the scheduled task on the ControlUp Monitor machine, you need both sets of credentials. Therefore you have to run the Store_credentials.ps1 script twice to create those credentials files to access both:

To create the required credentials files:

If you are not in the same folder as where the store_credentials.ps1 script is saved, you must give the full path after the.

Once you have run the script twice, two encrypted .xml files are created in this folder on the ControlUp Monitor machine: C:\ProgramData\ControlUp\ScriptSupport.

If you are running the scheduled task under a different account, you need to run the script again twice to set up new credentials files as these can be used only by the account that created them on the same machine they were created.

3. Set up a Windows Scheduled Task

Follow the steps in this article to create the Windows Scheduled Task.

In the Windows Local Security Policy, ensure that this user’s role has Log on as a batch job properties. 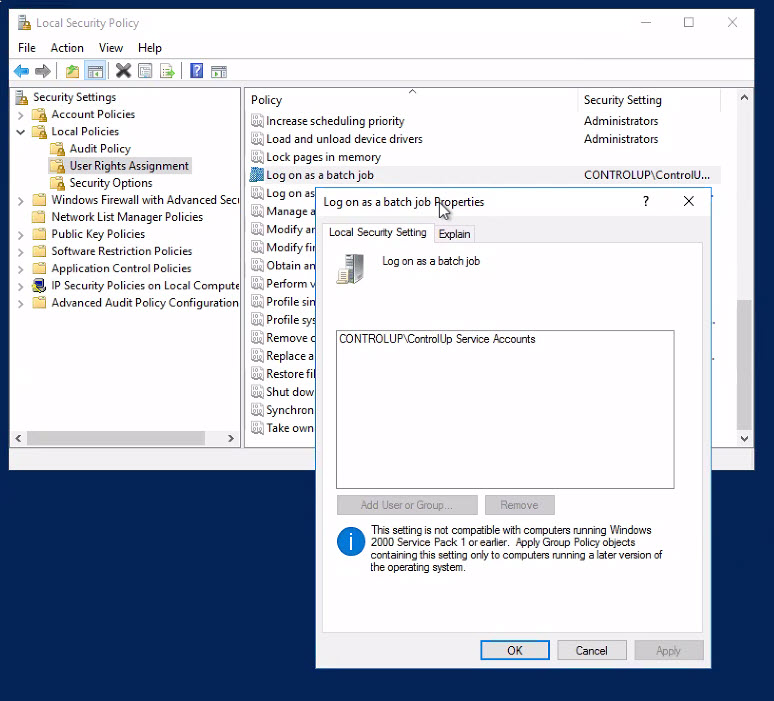 The credential tasks are set to run powershell.exe with these command lines for the create and delete tasks respectively: