These security settings are assigned per role and may also be assigned differently for every folder in the organization tree, which enables segmenting your environment into distinct areas of responsibility. Organization members are allowed to perform organization-wide actions but not management actions. For example, they can see the folder tree, create or modify folders, add or remove computers and connect to computers to see their performance information, however, they cannot perform any actions on the managed computers.

You can create custom roles for different teams or individuals on your network using the Manage Roles window. Active Directory users and groups from any domain or forest configured in ControlUp may be members of these custom groups.

As a security precaution, you can not modify the Security Policy if you have been disconnected from the Central Configuration Store for more than 24 hours. Should you wish to limit your organizations maximum offline period even further, contact support@controlup.com

You can view the current owner for your organization by clicking Manage Roles button in the Home ribbon of the Security Policy pane:

Upon initial configuration of the ControlUp Security Policy, it is recommended to configure a restricted Active Directory group with more than one user as an Organization owner. This enables you to reset the Security Policy to factory settings, even if the user who originally created the Organization cannot be contacted any longer.

ControlUp evaluates administrative permissions according to your currently logged-on Windows account. Every ControlUp organization contains a list of roles that determine the permitted actions for each role member. Every ControlUp role must include at least one Windows user or security group. By default, the Security Policy includes the following user roles:

These default roles cannot be deleted or have their membership modified using ControlUp, however, each role can be granted some or all of the Management Actions, depending on the type of role. 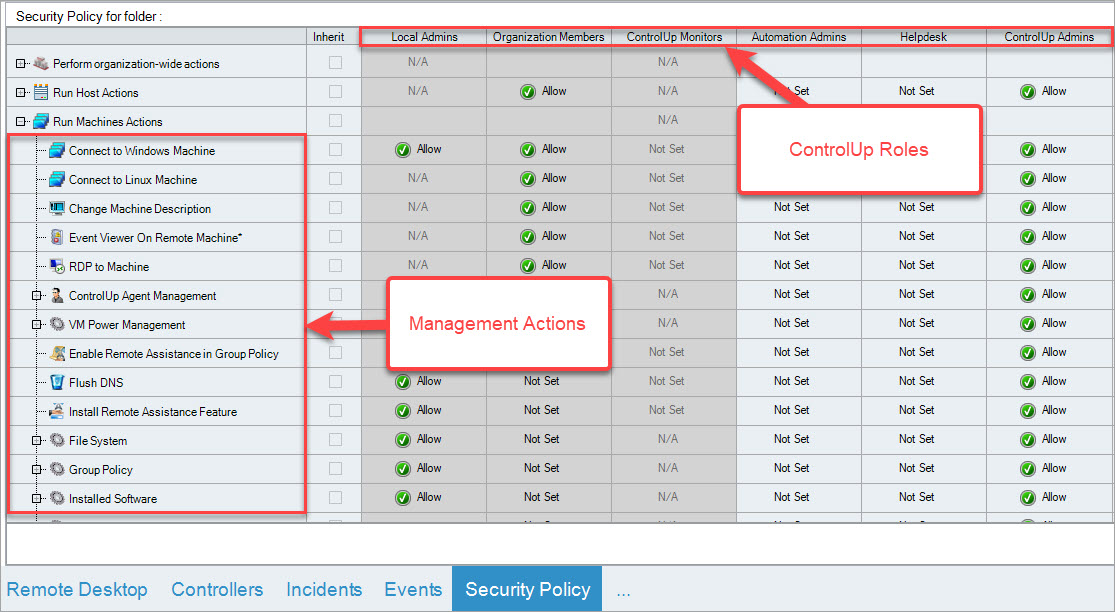 You can create new roles in the Roles Manager, which is a built-in permission initially granted to the organization’s owner. Upon initial configuration of the ControlUp Security Policy, we recommend to configure a restricted Active Directory group as a role manager.

To create a custom ControlUp role:

By default, ControlUp only displays group accounts in the search box. In order to display individual user accounts, select the Users and groups radio button.

The rows in the permissions grid correspond to management actions. For more details regarding particular permissions, refer to the Action Permissions section below.

Every ControlUp user may be either allowed or denied access to a management action, depending on their role membership and the location of the managed resource in the organization tree. Every cell in the permissions grid may be in one of the following states:

Once the Inherit checkbox is unchecked, a blue exclamation point icon on the folder, indicating that part of its Security Policy is no longer inherited from the parent folder:

In the above example, the Enable Maintenance Mode management action for the "Hypervisors” folder is not inherited from its parent folder, hence the blue exclamation point icon in the folder in the organization tree.

To grant ControlUp user permissions for management actions, you need the following details:

Once you have obtained the details above, click on the desired folder name in the organization tree on the left and locate the row in the table with the desired action name in the row name.

If the Inherit checkbox for that row is selected, deselect it. If not, click on the cell with the desired Role name in the column header and select Allow from the drop-down list.

Click Apply on the Home ribbon to save the changes. As a result of the operations in the example above, members of the Helpdesk role have the ability to run the Refresh Group Policy action on machines located in the Workstation folder.

The difference between these two methods is that Explicit Deny overrides any other permission, and the affected users will always be denied access to the action, even if they are members in additional roles that allow access to the same action. Implicit Deny (or Not Set) means that users are not allowed to run the management action unless permitted to another role they are also a member of.

It is considered best practice to use the Explicit Deny approach only if you need to configure an exception for an existing rule.

For example, to enable all Local Admins to restart workstations, except for Helpdesk users, an Explicit Deny is recommended.

However, to ban Local Admins from restarting machines, it is recommenced to use an implicit Deny (Not Set) permission.

There are several methods of restoring the default Security Policy in ControlUp, depending on your needs:

This section describes all the permissions configurable in ControlUp.

These actions are performed on objects in the ControlUp’s organization tree only, without affecting managed resources, such as machines or user sessions. They can also be referred to as 'tree actions' since they are executed using the ControlUp Real-Time Console and include the ability to add or remove machines, create and arrange folders, and change permissions.

These actions are performed on the managed machines via the ControlUp Agent. Actions that have an asterisk after the action name are dependent on your currently logged-on Windows user’s rights because they use RPC to access the remote machines.

These actions define how the user role can interact with the ControlUp Agent. All actions require RPC access and valid administrative credentials on the target machines.

In this category, you see all installed Script actions in your environment. In here you can define which user role can execute a certain script.

Actions in this group are invoked using the Sessions view and performed on the managed machines using the ControlUp Agent.
A user who is granted access to these actions can execute them only on user sessions hosted on managed machines affected by the Security Policy you are currently editing. Note the caption on top of the permissions grid that reads “Security Policy for …”
For more information regarding these actions, refer to the My Organization Pane article.

Actions in this group act upon processes on managed machines and are executed using the ControlUp Agent.
A user granted access to these actions can execute them only on processes running on managed machines affected by the Security Policy you are currently editing. Note the caption on top of the permissions grid that reads “Security Policy for …”
For more information regarding these actions, refer to the My Organization Pane article.