This document describes the ControlUp suite architecture, including different deployment topologies scenarios, a description of all major components and their communications model, data stored in the relevant ControlUp data stores, and data protection mechanisms.

ControlUp supports various topologies based on customer requirements and security policies. Below we will describe the two major topologies used by ControlUp customers.

ControlUp Hybrid Cloud mode is enabled by default if your network has Internet connectivity. In this mode, the ControlUp backend components are hosted on our secured Amazon Web Services Cloud servers. The ControlUp Real-Time Console and Monitor run inside your enterprise network.

The following drawing is a high-level overview of ControlUp's architecture when working in Hybrid Cloud mode: 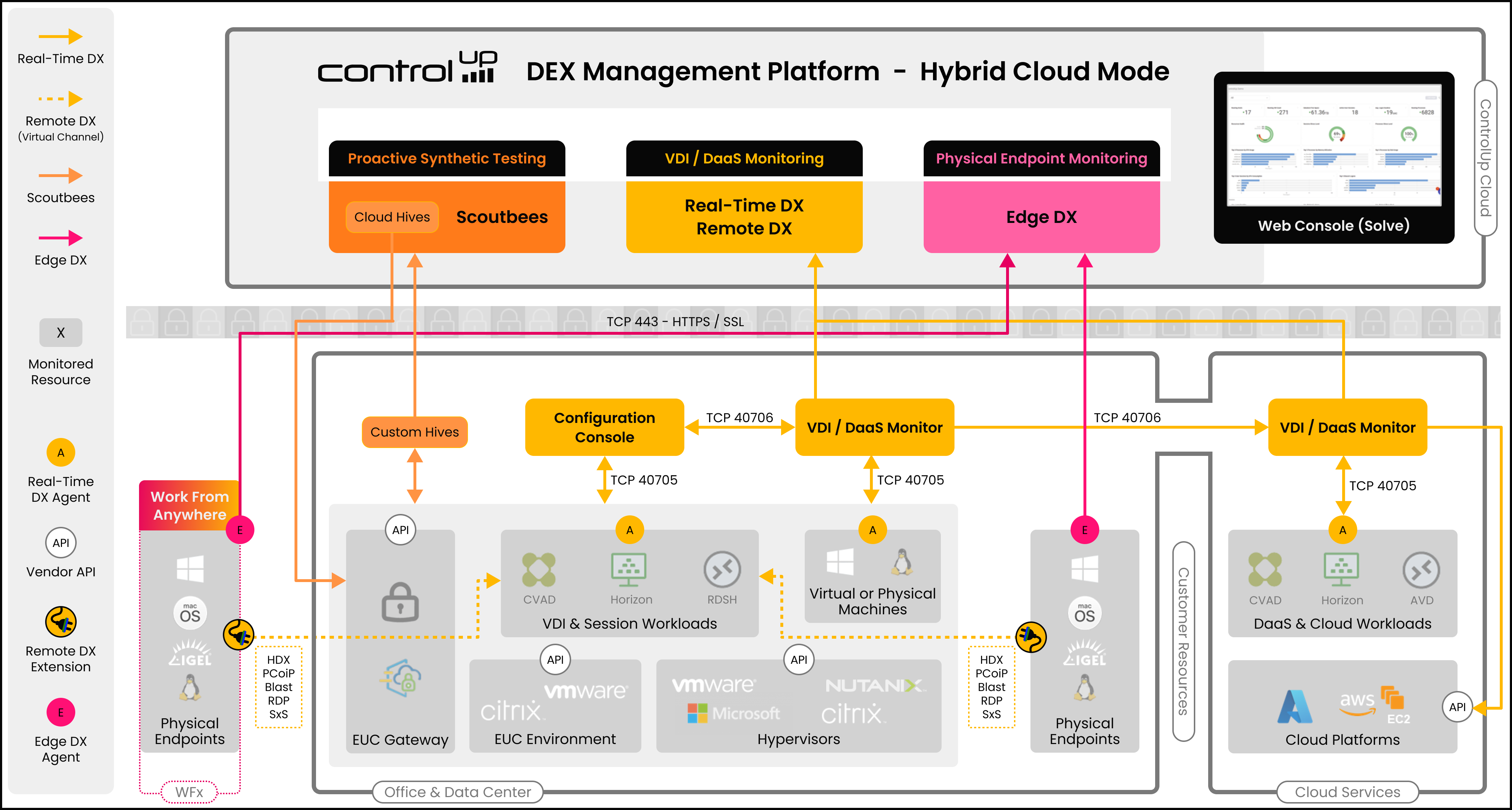 Here are the various software components that are part of the ControlUp architecture.

ControlUp Console is the main component used by sysadmins for real-time management and monitoring of their virtual infrastructure, physical and virtual servers, VDI, and RDS environments, as well as monitoring physical endpoints and applications.

The ControlUp Monitor service is a key component in any ControlUp deployment. The Monitor Service carries out these major functionalities:

Once installed and started, the ControlUp Monitor logs into your ControlUp organization and connects to your managed computers/VMs, Hypervisors, CVAD sites, Citrix ADC appliances, and AWS regions. The Monitor starts receiving system information and performance updates from your organization, just like an additional ControlUp Console instance. The primary difference between a ControlUp Monitor Service and a Console is the fact that the Monitor runs as a Windows service, requiring no user interaction and allowing for continuous monitoring of your resources, ensuring continuous coverage for incident alerting and reporting capabilities among others.

The ControlUp Monitor Service also uploads the historical data that is used for generating reports and analytics displayed in ControlUp Insights. For more information regarding the architecture and security measures for ControlUp Insights, please refer to the “ControlUp Insights – Security Measures and Procedures ” document.

A software component that collects performance and configuration information from the Hypervisor management web service, the CVAD sites, the Citrix ADC appliances, and the AWS regions via remote API calls. By default, each ControlUp Monitor Service is configured as a data collector which pulls data directly from the connected hypervisors (ESXi, AHV, Hyper-V, or Citrix Hypervisor), CVAD brokers, and Citrix ADC Connector

In a production deployment it is recommended to configure a dedicated data collector which acts as a proxy for all other ControlUp consoles and Monitor services:

Configuring a dedicated data collector is a best practice for increased performance. For more performance recommendation, see this article.

The ControlUp Data Collector communicates with the configured vCenter server via the SDK web service, the default communication channel is based on the SSL protocol (e.g. https://vcenter.fqdn//sdk). By default, data collection occurs every 20 seconds and a read-only account is sufficient to pull all configuration and performance data, in order to enable VM Power Management, go to the Virtual Machine/Interaction category and enable the following: ⧫Power Off ⧫Power On ⧫Reset.

The ControlUp Data Collector communicates with the configured Citrix Hypervisor via port 80 (by default) and also communicates directly with each Citrix Hypervisor pool member to pull the real-time performance metrics via the RRD API. By default, data collection occurs every 20 seconds and a read-only account is sufficient to pull all configuration and performance data, in order to enable VM Power Management, upgrade the user role to ‘VM Operators’.

The ControlUp Data Collector communicates with the configured CVAD Broker via port 80 (by default) to pull configuration and performance data. During the initial connection, the data collector discovers all CVAD Brokers and saves them in the Broker's Failover List to enable data collection in case the first CVAD Broker is not available. The data collector utilizes both the PowerShell and OData APIs to pull relevant data in Delivery Groups, Brokers, VDA’s, User Sessions, and Published Applications.

The Read-Only Administrator right to all farms that will be managed is sufficient for monitoring purposes. If you want to be able to use the built-in CVAD management features like enabling maintenance mode for example, then this account will require the following permissions:

The Data collection intervals are as follows:

"Cloudwatch" data – depending on whether the instance has detailed monitoring or not (as defined on the AWS instance itself). Detailed monitored instances - 1-minute intervals.

The ControlUp Data Collector communicates with the Citrix ADC appliance over HTTP or HTTPS, depending on the user’s preference over API. The data collections intervals - Depend on the size of Citrix ADC deployment and are configurable.

For further information, refer to the following article .

ControlUp Cloud Servers reside in the Amazon Web Services cloud (US and Ireland datacenters) and provide login, licensing, central configuration, and database services for all ControlUp Consoles and Monitor service instances running on the customer network.

All data uploaded to ControlUp Insights is loaded from Amazon S3 into Redshift, a petabyte-scale SQL data warehouse service that runs on highly optimized and fully managed AWS compute and storage resources

ControlUp Insights offers a web portal (https://insights.controlup.com ) that allows authorized users to display, save, export, and share reports based on the uploaded data. The web portal is hosted by Amazon Web Services using the EC2 service.

Here are the various data stores being used in a ControlUp deployment.

A proprietary database is used by each ControlUp Console / Monitor service instance to store all real-time performance and configuration data gathered by the data collection agents. This database is a volatile database, which exists only when the console/monitor executable is running. The Security Policy within the Console allows for proper role-based maintenance of the various features within the Console. The in-RAM data retention policy allows up to 100 historical transactions per counter.

The ControlUp central configuration is hosted on a Lightweight Directory Services database. The location of the database depends on the chosen ControlUp topology:

The configuration database for hybrid-cloud is stored on the ControlUp Servers running in the AWS cloud.

The configuration database includes all persistent configuration objects that are part of the ControlUp organization, including the following objects (not all items are listed here):

User credentials are never stored in the configuration database.

All data objects in the configuration database are encrypted using the Rijndael algorithm (AES) with a per-customer random 128-bit encryption key. In the Hybrid Cloud mode, the encryption key is stored on the ControlUp Cloud servers and protected using DPAPI. In the On-Premises mode, the data is encrypted for obfuscation purposes only, the key is stored locally, along with a secret hardcoded string.

All data objects are encrypted locally, at the Console/Monitor instances, before being transmitted over the network to the relevant web services/database.

The ControlUp Incidents database is hosted on a Microsoft SQL database.

Incident Triggers are definitions of significant events that should be recorded by ControlUp for later analysis. Each trigger includes a list of conditions that specify when the incident will be recorded and which follow-up actions will be performed at that time.

Sensitive Incidents related data such as host and computer names, IP addresses, account names, event message data, and process command lines are encrypted using Rijndael algorithm (AES) with a per-customer random encryption key. In the Hybrid Cloud mode, the encryption key is stored on the ControlUp Cloud servers and protected using DPAPI. In the On-Premises mode, the data is encrypted for obfuscation purposes only, the key is stored locally, along with a secret hardcoded string.

All incidents are encrypted locally, at the Console/Monitor instances, before being transmitted over the network to the relevant web services/database.

Configuration Cache files are stored on the computer running the ControlUp Console and the ControlUp Monitor service, in the Application Data directory under the user’s profile (e.g. %UserProfile%\AppData\Roaming\ControlUp). By default, NTFS restricts access to the file to allow only the user himself and members of the local Administrators group.

If the files are copied and used by a different user, the encrypted data cannot be decrypted and the user will have to re-enter all passwords. Other configuration data will be available.