The Edge DX scripting engine is a powerful and infinitely extensible way to distribute and run scripts on Windows, Linux and Mac devices to perform IT administration tasks and to collect results and data.

The terms SIP and SIP Agent in the UI, scripts and script logs refer to Edge DX.

Existing Scripts Available in your Tenant

On the Scripts page, you can filter the existing scripts by Name, Description and/ or Trigger.

To revise an existing script, input the changes you want to make to the script in the relevant script identification and configuration fields, and then click Update Script.

Create a New Script based on an Existing Script

Create a New Script from a Blank Template

To create a new script from a blank template, click Add Script on the Scripts page. A blank script template opens.

Input identification and configuration details for the new script and then click Create Script to create the script.

See Script Details for additional information about the script identification and configuration fields in the script template.

To view the identification and configuration details of a script that exists and is available in your tenant:

To access a blank template for providing identification and configuration details for a new script:

See the table below for details about the script identification and configuration fields in the script template:

Data Collection includes an option for selecting Sends Data, and if Sends Data is selected, Overwrite Existing Data and a Data Index can be selected. 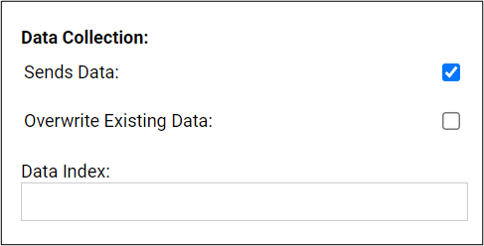 If the Sends Data option is selected and the script completes before the timeout with no errors (empty stderr), then the stdout is inspected for a section having the format:

The data between the “### SIP DATA BEGINS/ENDS ###” lines is a JSON-formatted array of dictionaries that contains rows for the selected index. Examples of how to create this output with PowerShell, Python and other script languages are included in the scripts in your tenant. Any errors in the format are rejected by the Edge DX Agent and the reason is captured in System Events.

When the Edge DX Agent finds output that matches this pattern, it is sent to the Edge DX service for the specified Data Index, where it can be inspected with the Data view, or in a report if one exists.

If the Data Index does not already exist, a new one is dynamically created.

When adding data to a custom index, we strongly recommend using only integer and not floating-point values. For example: It is better to store milliseconds as 375ms, than as 0.375 seconds. This avoids issues which can occur with data that spans multiple time periods.

Whether or not the Sends Data option is selected, the stdout from the script is also inspected for a section having the format:

Run Only when Online

The configuration of this setting determines whether the script runs when the end-user device is offline, i.e., it is not able to connect to the Edge DX service.

Several aspects of the Run Only When Online setting are explained by the three scenarios presented in the table below:

Run Only when Idle

The configuration of this setting determines whether the script runs when the end-user is idle.

If a script is triggered to run when the option Run Only When Idle is selected and the device is not idle, then the script does not start. This option is useful for scripts that consume a lot of system resources and could adversely impact user experience while running. You can set the CPU level and duration thresholds for determining idle status in Agent Settings.

When script settings are changed, they are updated and securely cached on each device when it next does a configuration update, as determined by the Configuration Update Interval in Agent Settings. At that time, any new or changed scripts are downloaded by the device and cached locally in a secured folder. Any old or unrecognized files in that folder are removed.

A script can be set to run as a result of a trigger by specifying one of the triggers listed in the Trigger menu in the Trigger field of the script template: 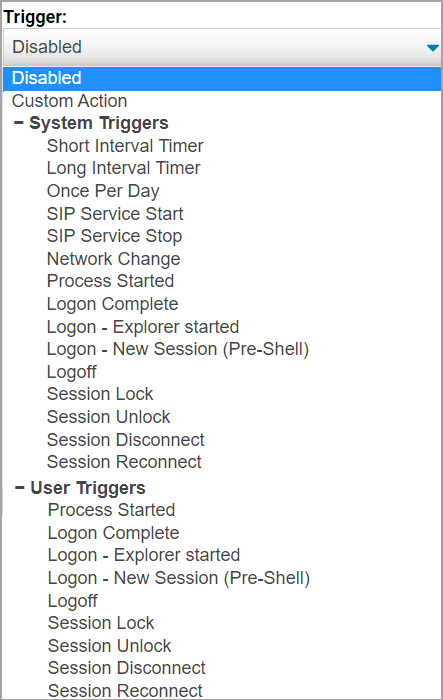 There are three types of script triggers:

When a script has a time-based trigger, the script is triggered to run regularly at intervals. The interval is configured as detailed in the table below: 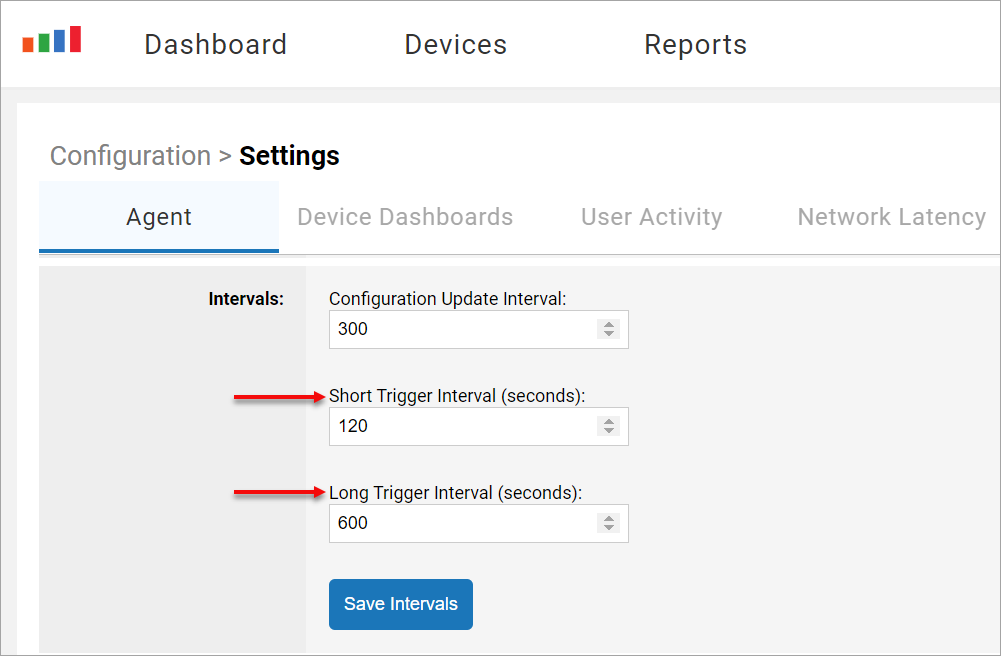 When a script has a Device Event trigger, the script is triggered to run when a particular device event occurs, as detailed in the table below:

Device Event triggers for Windows end-user devices only are listed and described in the table below:

Actions in the Devices section of the Edge DX User Interface.

To run a script based on a Custom Action: 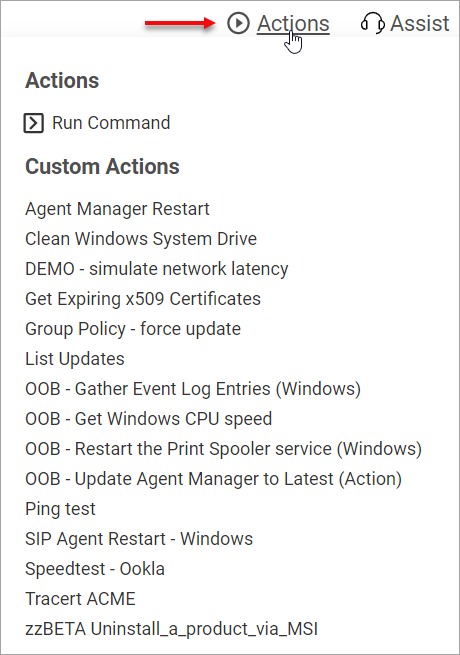 The Action Check interval can be changed in Agent Settings.

Scripts run in the context of the System , except on Windows where some triggers have the option of running as User .

On Windows the User context means the user who performed the action, for example, the user that started the process or logged on to the desktop. User scripts are copied to a temporary (secured) location, the user is given permissions to execute them, and then they are deleted when complete.

Targeting a Script at a Specific Device

To ensure a script only runs on certain devices, you can add a line at the start of the script, for example, in PowerShell:

You can also filter by Edge DX device group with the SIPDEVICEGROUP environment variable.

Popping a Dialog to a User (Windows)

The UserPrompt.exe executable included with the SIP Agent on Windows can be used to display a dialog to the user.

Use a line like the example shown below for a cmd.exe script. Note the start /b at the beginning means that the script immediately returns after launching UserPrompt.exe, and so you will not get timeout errors if the user does not acknowledge the dialog for a long time. However, you will still get an error if the command line fails.

The following example is for PowerShell:

If you want to send data that can be viewed in a report then you need to format it as data. On Windows this is easily done in PowerShell using a Hashtable (which is very much like a Dictionary):

Every time this script runs it will send a row for that device with two fields and a value for each, which appear as columns in the table report.

If you want to send multiple rows from each device in a single data upload, you can use a .NET List collection like this:

This will iterate through $MyDataCollection adding a Hashtable to the List for each entry, which will appear as rows for each device in the report table.

Choosing cmd.exe or VBScript over PowerShell

PowerShell is very powerful, but it consumes far more resources than cmd.exe and can be slow when iterating through large amounts of data, especially with complete Where-Object queries. Whenever possible, use cmd.exe or VBScript.

Sending data to the Events Log using cmd.exe is very simple. For example:

Using the User SID and Logon ID Parameters in Scripts

In the example shown below, a PowerShell script running as System in response to a User Event (e.g. a Logon) can look in the User’s HKEY_CURRENT_USER registry hive by opening a path under HKEY_USERS using the User SID, which was passed to the script as the first parameter:

Without this line, PowerShell will sometimes try and convert international characters to their closest ASCII equivalent, which can cause havoc with data formatting.

The following is a step-by-step guide to creating a script to get the CPU temperature from Microsoft Windows machines, using a PowerShell script, and then displaying the output data in a custom report:

The Data Index field defines a new location or table for the data to be pushed into. Once created, the Data Index can be found under Configuration > Data: 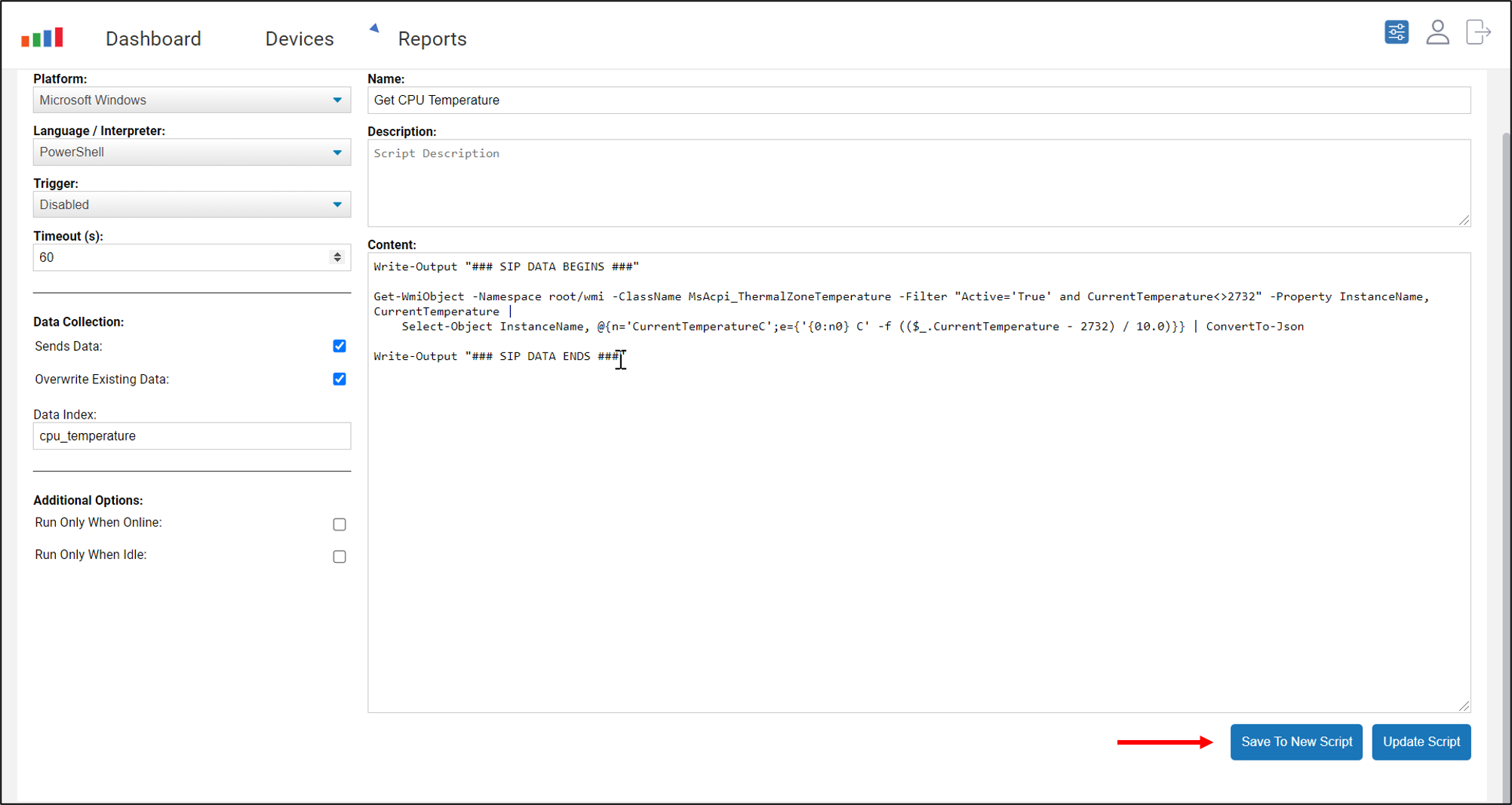 To create a custom report showing CPU temperature for your devices:

To learn how to get alerts about a temperature report and other alert types, see Edge DX Alerts.